After a false start – our plane didn’t leave due to heavy snowfall in Amsterdam on Friday the 17th – we finally arrived in South Africa for our two weeks of sun, sundowners & safari. Because we departed three days later than planned, we had to reschedule the booked accommodation. Many thanks to José for quickly booking us into the Airport Game Lodge at Jo’burg, to Trish & SANParks (Nedret & Joep) for helping me rescheduling our itinerary and to Cars for helping us with our rental.

After landing at Kruger Mpumalanga International Airport the next day, we picked up our car and did some shopping in Nelspruit. We only got a few essentials – cool box, ice, meat, veggies, biltong, chili bites and DEET – and quickly drove on, as I can spend HOURS in big supermarkets if I get the chance. We entered Kruger via Numbi gate, where we were greeted by Woodland kingfishers (first lifer for Foeke). And there we were, in beautiful green, green Kruger National Park.

Because of the rescheduling, we missed out staying in lovely Satara and bushveld camp Shimuwini. We were too tired to drive up north on Wednesday and opted for a night in Skukuza instead.

So, after getting our permit, we slowly drove up the H1-1 to Skukuza, where cold beer was waiting for us. Our first good sighting was a rhino pretending to be a hippo.

It was standing in a pool of water, enjoying a couple of hours of natural skin therapy. Further along the road we saw another ‘white’ rhino. This one has a wound just below its eye. Perhaps it had been in a fight.

The next exciting sighting was a lifer for both of us, the lovely Pin-tailed Whydah.

The Whydah was followed by another lifer, the European Roller. Imagine going all the way to Africa to see a European bird. :hmz:

We then saw two juvenile elephants, playing in a little pool of water. (It was great to see water everywhere, in July/August when we usually visit, the park is always bone dry). The final sighting of the day was a pretty European Bee-eater.

We arrived at Skukuza where we cracked open a Windhoek lager, lit the braai and had boerewors for dinner. We then collapsed in our little bungalow (no 82) and slept the night away ‘til the Hadeda woke us at dawn.

We woke up early on Thursday the 23rd. Even though we were still quite tired, we had a long drive ahead (Mopani) and wanted to get an early start. The weather was lovely and we left Skukuza with great expectations

Our first full day in the park … what would we see?

Would we see sable, leopard in tree, lion …?

We came across the herd of Sable Antelope on the H1-2, about 45 minutes after we left Skukuza. I think there must have been around 15 antelope in the herd. There were quite a few young ones too. I was mega excited about this super sighting and clicked away. But they stayed in the bush, so I couldn’t get a clear shot. Not to worry, we got to see the elusive Sable Antelope again. Yay.

Several cars whizzed by, unaware of the uniqueness of this sighting. Just as we were about to drive on, we were flagged down by kindred spirits who told us about the leopard in tree a few kilos further on. Our smiles got even bigger and we drove on, windows open, enjoying the lovely weather, bird sounds and cool African breeze until we spotted 5 cars on the side of the road. Yep. LIT. (leopard in tree)

We stayed with the lazy leopard for about 15 minutes, and then drove on towards our first pit stop of the day: Tshokwane Picnic Spot, where we arrived at 7 for a quick stop and stretch.

After a quick stop at Tshokwane – we didn’t hang around as the shop & restaurant were still closed – we continued on our journey north.

We couldn’t get over the greenness of Kruger National Park in Summer. We usually visit in July/August when everything is bleak and bare and dusty. Even the elephants are grey and dusty in Winter.

We were both having trouble keeping our eyes open, still very tired from travelling and all the drama before that. Just before I fell asleep on the steering wheel, we spotted a pair of lions in the bush. Well actually we first saw the mini traffic jam and then spotted the lions causing it. Anyway, it woke us up again and we made it to Satara.

I don’t know whose idea it was to open the Coffee bars at Skukuza and Satara, but he/she deserves a statue. Right there on the Satara grass. After a life-saving cappuccino (and a toasted sandwich) we hit the road again. The plan was to have lunch at Letaba and then drive the last bit to Mopani.

We spotted a group of ostriches on the way. We didn’t see much, because we were now travelling during the hottest part of the day. When we arrived at Olifants River Bridge, we got out of the car to stretch our legs and almost got wacked off our feet by the heat. It must have been at least 10℃ hotter than in Satara. We enjoyed the view and the hot wind for a bit and then set off to Letaba where lunch was waiting.

This little guy was having lunch too. It was great to be back in Letaba and enjoy the wonderful view at the restaurant. We felt almost human after our meal and were ready to drive the last stretch so we could collapse at our Mopani bungalow.

Which was exactly what we did after braai & beer. 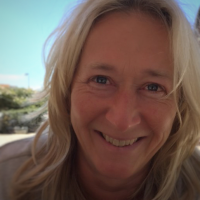